By: Jordan Ross – The Carillon 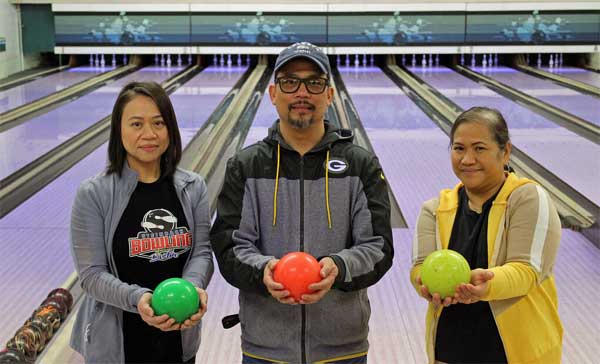 A new ownership group is bringing fresh energy and more amenities to the Steinbach bowling alley as the venerable institution approaches its 60th birthday.

Four local Filipino couples purchased Deluxe Bowl on Feb. 16 and have been busy ever since making the business their own.

A Monday visit found Rommel Gallego, president of the ownership group, carrying sheets of plywood into a karaoke room under construction.

The food, which will also include canteen staples like hamburgers and poutine, will also be available for takeout, effectively making the bowling alley home to Steinbach’s first Filipino restaurant—a welcome addition for anyone who has sampled similar fare at Summer in the City.

Bathroom renovations are also planned and the foyer’s dark brown wood paneling will also be updated. The exterior will receive a new coat of paint and signage proclaiming its new name: Steinbach Bowling Alley and Bistro. A grand opening is planned for June.

The ownership group consists of Gallego and his wife, Rosalita, along with Allan and Amelia Renacia, Truman and Chrysanthemum Tanedo, and Rommel and Karen Clamor.

The group has known each other since 2006, when they came to Canada. Some attended university together before emigrating.

The group began looking for a business to purchase last year, the Gallegos said. One day, Rosalita spotted the bowling alley in the real estate listings. The Gallegos had ran a business before, an internet cafe in the Philippines. Rommel said he couldn’t bear to see the bowling alley, which had brought joy to many families over the years, converted into something else.

“We looked it over and we decided that we wanted to continue the Jakubeks’ legacy,” Amelia Renacia said.

That would be Charlie and Viera Jakubek, who ran the bowling alley for 39 of its 59 years. They purchased the business from founding owners Bill and Katherine Kostynyk, who opened the doors in January 1963.

Unlike the Jakubeks, who recalled in a 2019 interview that they had never set foot in a bowling alley before buying one, the new owners are quite familiar with the game.

Rommel Gallego said he grew up 10-pin bowling. Amelia Renacia said for her it was five-pin. They explained bowling in the Philippines is as popular as it is in Canada, with alleys attracting a small group of devoted “fanatics” and a larger number of occasional bowlers.

The new owners will benefit from many improvements made by the Jakubeks over the years. The pin setting machines were replaced in 2003 and computerized scoring arrived in 2009. In 2019, $200,000 worth of renovations were completed. Half of that was spent rebuilding the lanes after an unfortunate 2018 rainstorm that struck during a roof replacement. New carpets, paint, and countertops followed. Benches were redone, as were the ceiling and gutters.

The Jakubeks then put the business up for sale. “Bowlers always have time to spare,” reads a small wooden sign near the entrance, but the same wasn’t true for the Jakubeks, who said they spent up to 70 hours a week running the business, which closed every summer.

All eight of the new owners work day jobs on top of running the bowling alley. Two are always on shift at the business, which is now open seven days a week. A strong turnout on Louis Riel Day last month convinced them to open on holidays, too.

Customer feedback has been nothing but positive since the group took over the business.

“Suddenly, we have a lot of group bookings,” Rosalita said.

On Sunday, six members of the Steinbach Pistons came in for a few frames.

Rommel Gallego said the Jakubeks have been “very supportive” during the transition. Reached by phone this week, Viera Jakubek said the transition has been a smooth one.

“We should have retired a long time ago. Physically, it was needed, but we couldn’t. You don’t just close the door and leave the business and leave the people that depend on it without some kind of backup. It needed to be sold in order for it to continue.”

She said the challenges posed by COVID-19 were unlike anything she and Charlie encountered before.

“We have endured over the years all kinds of things, from H1N1 and SARS…affecting us in many ways. But this was unprecedented. We were shut down for 18 months.”

With restrictions lifting, the Gallegos said the new ownership group is excited to once again welcome groups of all ages and sizes back to the bowling alley for some family-friendly fun.

-with files from Terry Frey
Reprinted with permission